Why Focus on Bisphenol A (BPA) & Phthlates As Markers?

This study will focus primarily on BPA as a marker for the presence of CEC/ECs. This is because foods, beverages and other exposure sources contain multiple compounds. That makes the task of identifying which compounds (or synergistic combinations) are responsible for a given health effect impractical for the scope and budget of this study.

Indeed, given the lack of data on the health effects of most chemicals involved, the task would be impossible for the budgets and technical abilities of even the most advanced laboratories. Significantly, even less data is known about combined health effects of the everyday mixtures to which consumers are exposed.

BPA and phthalates have been chosen as markers because the U.S. Centers for Disease Control has found those persistently present in almost all Americans.

Given that the now-well-studied BPA and phthalate compounds are often used together — and always used in combination with other polymers, resins, and product enhancement chemicals — we theorize that they are suitable markers for the presence of other “bad actors.”

Significantly, any health effects that may be observed from our study will clearly reflect possible synergistic effects from combinations of chemicals since it is impossible for us to know exactly which compounds are in a given product.

As the footnotes in the study & protocol point out, a number of published papers have measured levels of CEC/ECs in foods, beverages and other sources.

We have analyzed those studies and placed them in a manageable set of categories:

The present study will focus on dairy products as a category for its own abstain/intervention. This is because a recent study found an unexpected increase in phthalates especially in children.

That study theorized this increase was due to their greater consumption of milk than adults.

Investigators in that study theorized that the extensive use of plastics in the milk-production process was responsible for the phthalates increase despite the fact that milk was delivered in glass bottles.

The protocol calls for measurements and stepwise reductions over a nine-week period.

The first week is a baseline period after which health indicators are measured.

The second week, is one in which test participants consume a “typical” diet which will include food and beverages packaged in plastic and heated in the packaging as instructed. The diet will also include foods prepared from cans (tomatoes, vegetables, fruit). In addition they will experience ordinary environmental and contact exposures.

Then, for the next seven weeks, one category after another will be eliminated. 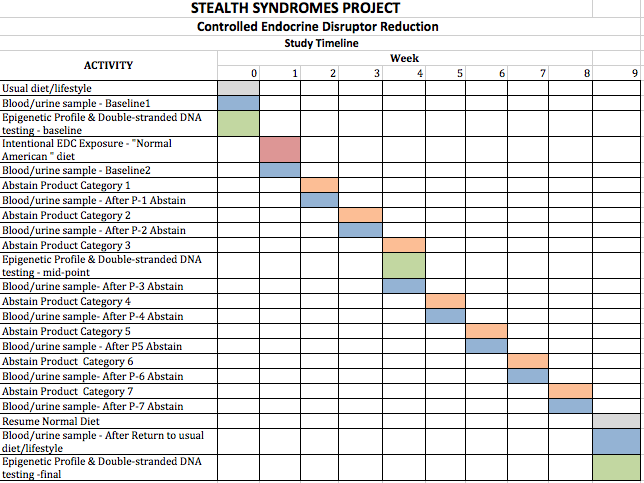 Let’s take one single meal as an example.

The first week of the study, the lasagna would be made with commonly used supermarket ingredients such as canned tomatoes and mass-produced ground beef wrapped in plastic, and browned in vegetable oil from plastic containers.

Of concern is the fact established by multiple peer-reviewed studies that he epoxy linings of more than 70% of food cans leach BPA and other environmental chemicals. The same is true for the plastic used to package ground beef and to bottle vegetable oil.

The second week of the study, the recipe is the same, but instead of cans, tomatoes packed in glass jars would be used in the lasagna. Traces of surfactants used in the washing of the jars may exert some biological action, but that is unknown.

The third week of the study, the recipe remains the same as week two except that lasagna is made with fresh tomatoes.

The fourth week of the study, the recipe remains the same as week three, but the lasagna is made with fresh organic tomatoes.

The fifth week of the study, the recipe remains the same as week four except the lasagna is made with fresh organic tomatoes and freshly ground beef that has never been wrapped in plastic.

The sixth week of the study, the the recipe remains the same as week five except lasagna is made with fresh organic tomatoes, freshly ground beef that has never been wrapped in plastic and cheeses never exposed to plastic wrapping.

In weeks 7-9 the recipe remains the same as week six. These three final weeks involve the elimination of BPA from non-food and beverage exposures with the result that subjects will consume meals identical to those in week 6.

In order to assure best compliance among test subjects, all meals will be standardized, prepared in advance, packaged in glass, frozen and microwavable.

Snacks and other consumables will be similarly standardized.

Test subjects will engage in real-time, daily logging of everything they eat, drink use, or apply to their bodies.

Preliminary universe of tests based on known cellular and biological mechanisms of BPA, phthalates and other CECs. To be narrowed down in consultation with a qualified hematologist.